A very special person I have met on one of our feeding scheme rounds is a Gogo – who will forever be a mother.  I still do not know her name as her English is limited to "God Bless you", but I do know that she has a heart that has imparted many blessings.  She lives in a tiny house – a 2-roomed house in fact.

One side is the kitchen / Bathroom / "lounge" (with no furniture) and the 2nd room a bedroom for 5 people.  There is no running water in the house – just an outside tap; and electricity gets bought when they have the odd Rand or two.  Her daughter died while giving birth to twins and thus left behind a young boy of 6 and twins (a boy and girl).  The daughters' husband is never home as he is permanently on the road looking for work.  Which leaves the Gogo to act as mother to the children.  Often one will arrive and she will be sitting on the floor with the twins on either side of her – feeding, dressing, changing (the twins are now about 6 months old) – and the young boy also sitting at her feet "learning his numbers", as they could not afford to send him to a pre-school.  She also looks after Ashley – an abandoned brain-damaged girl – from another family member.  Ashley spends her days rolling around on a blanket – is wearing nappies and needs to be fed, changed, calmed down at regular intervals – and is basically an adult baby.

Have I ever heard a word of complaint from this Gogo who herself should be spoilt and enjoying her twilight years?  Never.  Just expressions of thankfulness; praise to God for seeing her through yet another day and noticing a woman caring when she herself needs caring.

The photo is of the young boy enjoying his daily bath.  Isn't life wonderfully simple?  Who else can brag about having a bath in the beautiful sunshine? 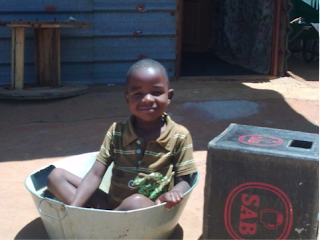 What do you get if you take 19 enthusiastic American volunteers, put them in the care of 7 dedicated local volunteers, and give them 3 vehicles and 2 weeks? I'll tell you what you get – you get 5 upgraded preschools, 3 preschools with new outside play equipment, 3 preschools with new rainwater collecting tanks, and over 100 lives touched and changed through donations of clothes, toys & stationery. You get new friendships formed and old friendships rekindled through many new and exciting experiences. You get what we call the ODFL/CUDDLE Collaboration!

This was the fourth year that the CUDDLE Trust was privileged to host the One Dollar For Life (ODFL) Team, and as before it proved to be a hugely successful, life changing, two week service trip. Our visitors hit the ground running, taking a tour of Tembisa, visiting the various schools they planned to be involved at and helping serve a meal to the homeless on their very first day here.
During their relatively short visit they managed to impact many lives in various ways, perhaps the most visual being the 5 preschools they upgraded. This entails cleaning, repainting, painting murals, putting up shelves and other miscellaneous "fixing", as well as gifting the school with educational resources and furniture. Three schools received new playground equipment (something the schools would NEVER be able to afford) and three schools were fitted with rainwater collecting tanks as they are in areas where there is rarely water available.

They spent many hours interacting with and providing educational activities for preschool children, often almost disappearing underneath the mass of little children wanting a turn to play! The squeals of delight and never-ending cuddles were the highlight of the trip for some of the more motherly volunteers!

Our local KINOS (Kids In Need Of Support) group also benefited from the ODFL visit, spending several days together, either at Holiday Clubs, helping make up food parcels, or joining in on the fun at ice skating, lazertag and a visit to the zoo. While at the zoo the ODFL volunteers generously offered to sponsor the KINOS Kids so that they too could enjoy the experience of petting a lion cub! The KINOS Kids returned the favour by hosting the members of the ODFL group for a traditional South African meal at their various homes in Tembisa.

Since a visit to Africa just wouldn't be complete without a "safari" so the ODFL group spent a day at the beautiful and conveniently close Pilanesberg Game Reserve. They were spoilt for choice with close-up sightings of almost all the African animals, excluding cats. Many of the elephant families had calves in tow which was a special treat for all to see!

We hosted a good old South-African "braai" as a farewell dinner and the KINOS Kids joined us for a lovely evening of reminiscing about all the fun everyone had had. The evening inevitably ended with everyone saying their good-byes – most everyone shed a tear or two - and plenty of wishes for the group to visit again next year!

For more photos than below check out the facebook page at www.facebook.com/cuddletrust 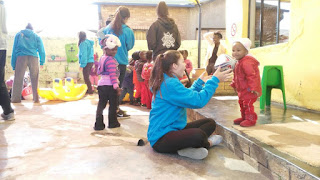 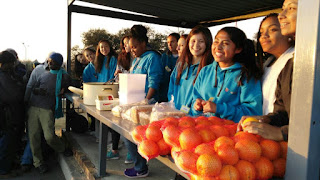 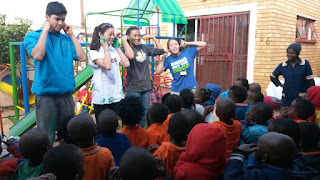 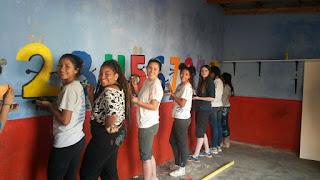 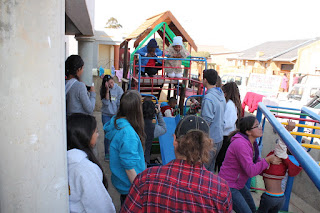 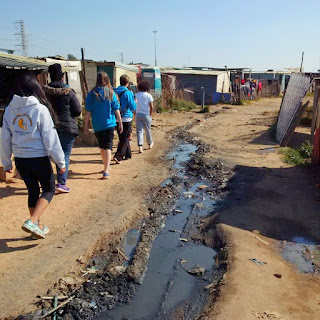 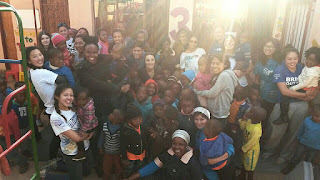 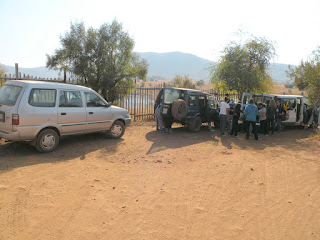 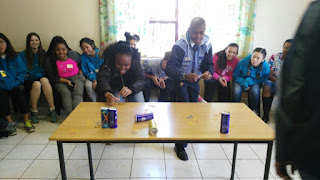 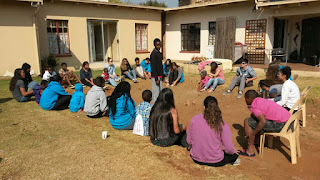 Posted by LyricLad at 9:19 AM No comments: